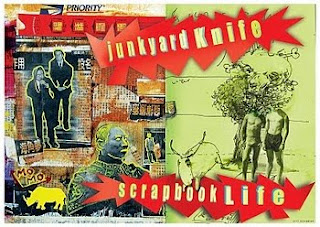 Edge.
Last place to stand before falling.
Where broken mirrors piece together
jagged shards of memory and imagination:
life's junkyard.
Each shard a knife.
Wielding our knives we meet,
at the scrapbook edge.


Jiri Szeppan is a German born artist and editor. He has been living in Brussels ( Belgium) since 1996 where he runs his AJS Gallery  His teachers in Germany were Fritz Bauer and Emmett Williams, among others. He has worked as a contributor for “Der Stern” and “ The Bulletin” before he launched is own “cross-over”printing studio in Brussels.


Doug Millison – a writer, artist, editor, and publishing entrepreneur – keeps his scrapbook at the edge of the North American continent, near San Francisco.  He is the co-author and editor of the forthcoming prose+comics scrapbook novel, The Concrete Jungle Book by Morris Armstrong Jr. proudly a.k.a. "Little Mo" with help from the Nonhuman Crew. In the late 20th century, he founded and edited Morph's Outpost on the Digital Frontier, a magazine for interactive multimedia designers and developers, and Blaster, the first lifestyle magazine for screenagers.
http://dougmillison.com/
http://www.facebook.com/dougmillison