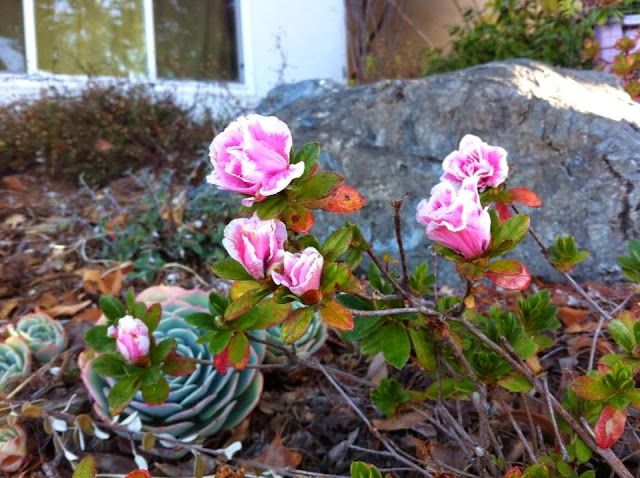 [All photos by Doug Millison]

The work of art may thus consist of a formal arrangement that generates relationships between people, or be born of a social process; I have described this phenomenon as 'relational aesthetics,' whose main feature is to consider interhuman exchange as an aesthetic object in and of itself.
–Nicolas Bourriaud, Postproduction Culture as Screenplay: How Art Reprograms the World


"The Free Gallery" is a work of social art, a work of art that borrows the social form of the art gallery and whose major elements include the activity of the people who visit the exhibit and the relationships that they form in the process. "The Free Gallery" proprietor, Jocelyn Meggait of Free Utopian Projects, has built a gallery within the hosting Pro Arts gallery in Oakland, California, and has organized an exhibit of art works and interesting second-hand objects from nearly 70 artists. The public is invited through March 29, visitors can expect to find art works and other treasures and choose one to take away for free.

I donated three new "Single-Serving Size" Little Free Art Gallery works to be exhibited and given away at the show:  The Hilary Box, Boss Joss, and Big Joss Man, Can't You Hear Me When I Call?  The Little Free Art Gallery project also borrows the social form of the art gallery and incorporates the activity of the people who visit and "enter" the gallery installation, and who take a piece of art from it 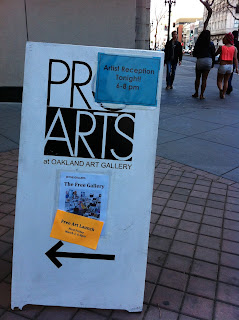 The exhibit replicates the social experience of the art gallery.  Visitors respond to publicity about "The Free Gallery" in social media, from Pro Arts, and other sources, and come to visit. Admission is free. Instead of selling the works on exhibit, "The Free Gallery" offers its exhibited  items for free, one for each visitor who wishes to take one.  Meggait interviews each visitor and records the reason given for this particular selection, and photographs the patron with her selection. A basket at the information desk offers offer business cards and flyers from exhibiting artists, as well as "The Free Gallery" post card. A guest book sits ready for visitor comments. New art works are placed in "The Free Gallery" daily throughout the show. On opening night, Meggait said that she expects everything to be taken by visitors by the end of the exhibit period.

In explaining "The Free Gallery", organizer Jocelyn Meggait points to the writings of Nicolas Bourriaud whose book Relational Aesthetics provides a theoretical frame for understanding art works that replicate social forms. (Bourriaud's Postproduction:  Culture as Screenplay: How Art Reprograms the World quoted above, is  available online as a pdf, search the title at Google.) "The Free Gallery" thus not only presents a well-curated and attractively-designed display of art works and interesting second-hand items, as an art work itself it includes the activity of the visitors who arrive:  they view the exhibit, talk with other visitors, select a work, describe why they are taking it, have their photo taken. The  social process that unfolds over time in this gallery-within-a-gallery constitutes Meggait's work of social art.

The Little Free Art Gallery works that I donated to "The Free Gallery" are also social art works. Intended as art objects, their exterior and interior surfaces have been decorated the way I create scrapbook collages, with a variety of materials and imagery spanning a spectrum of styles.

One interesting contrast:  "The Free Gallery" seems to have been inspired by art school theoretical studies, while Little Free Art Gallery is the result of my search to solve a practical problem – where to find exhibit space for my art, in the absence of relationships with existing art galleries. Creating my own exhibit space for temporary or permanent art installations led me to the discovery that I could use Little Free Art Gallery to recreate the art gallery experience and at the same time undermine or otherwise question the conventions of this social activity.  Only later, after encountering the Free: A Utopian Project Page on Facebook, and after I had started designing and writing about the  Little Free Art Gallery project, did I read Bourriaud's book and apply his theoretical framework to what I was doing.

Reading Postproduction:  Culture as Screenplay: How Art Reprograms the World in recent weeks has opened my eyes to a surprising number of parallels between projects from my career as online journalist and Web editorial consultant/designer and key art historical, critical and theoretical developments from the 1970s to the present.  I plan to detail some of these parallels in an article called "Life Imitates Art History" to be published in the near future here, on the Little Free Art Gallery blog, and Facebook Page.

Posted by Unknown at 9:05 PM No comments:

Tonight, 6-8 p.m. at the Artists Reception for "The Free Gallery" at Pro Arts, Oakland, California

The Free Show" preview starts today at Pro Arts in downtown Oakland, at 10 am., including 3 of my Little Free Art Gallery pieces, everything to be given away for free when the show opens March 1

"The Free Show" preview starts today at Pro Arts in downtown Oakland, at 10 am. I've got 3 Little Free Art Gallery pieces on exhibit, to be given away free. I'm not sure yet how it's all going to work, I guess on March 1 when the show opens officially, an "Artists Reception and Free Art Launch" will take place from 6-8 p.m., maybe that is when people will be able to take the art and other gallery items for free, I have no idea how it will work then or afterwards, maybe I will find out more before then. At any rate, it will be interesting to see how people respond to the whole thing.

Posted by Unknown at 8:45 AM No comments: